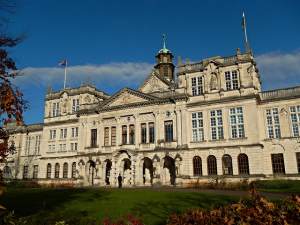 In June, plans were submitted for the construction of a 35 storey student accommodation building between Customhouse Street, Hope Street and Bute Street, opposite the Radisson Blu hotel. The building is set to become a landmark piece of engineering, beating not only Cardiff’s own Capital Tower office, which stands at 25 storeys, but also Wales’ highest building, the Meridian Tower in Swansea, which is 29 storeys tall. The construction of new student accommodation comes at a time when Cardiff is undergoing a huge architectural change due to the ongoing Central Square and Capital Quarter redevelopment schemes.

While there has been no progress on the plans submitted in June, a new application has recently been submitted to demolish the former York Hotel and Custom House in order to create more student accommodation. If approved, it is believed that this new accommodation block would help reduce the amount of vandalism and graffiti that has plagued the area since the buildings became derelict.

If the plans are approved, the new student building will accommodate 170 students, creating much needed space for students in a city that is increasingly becoming more popular amongst academics, with more and more students applying and being accepted to Welsh universities.

The design team, Morgan 2 Hayman, have made plans for the 7 storey development to include a coffee shop and a gym, perhaps offering students a cheaper alternative to gymnasiums and establishments located in the city centre, while still placing them in a position that has quick and easy access to the city’s many shops and restaurants.

Property specialists Bruton Knowles have warned that the building of this block of student flats could have a detrimental effect on landlords, especially in the Cathays and Roath area. Bruton Knowles’ Caroline Jones added that traditional student areas could be neglected because many students will be offered living arrangements closer to the city centre, changing the city’s landscape. She added that, by encouraging students to move from their traditional living spaces, it could create a vacuum for local businesses who rely on the custom of students in areas such as Cathays and Roath.

It’s not only businesses and landlords in typical student areas that would suffer from the expansion of student accommodation in the city centre. Ms Jones also added that by converting these derelict buildings into living spaces, they’re not being given the chance to potentially be used as office spaces for businesses. The consequence of this being that businesses, now unable to find office space in the business hub of Cardiff, will have no option but to base their operation outside of the city limits, impacting the Welsh capital’s business landscape.

Do you think that the building of new student accommodation is a good idea, or do you believe it will negatively impact local businesses? We’d love to hear your thoughts in the comments. In the meantime, if you are a student looking for accommodation, why not browse our selection of properties? Alternatively, you can pop into our office on Cathays Terrace.